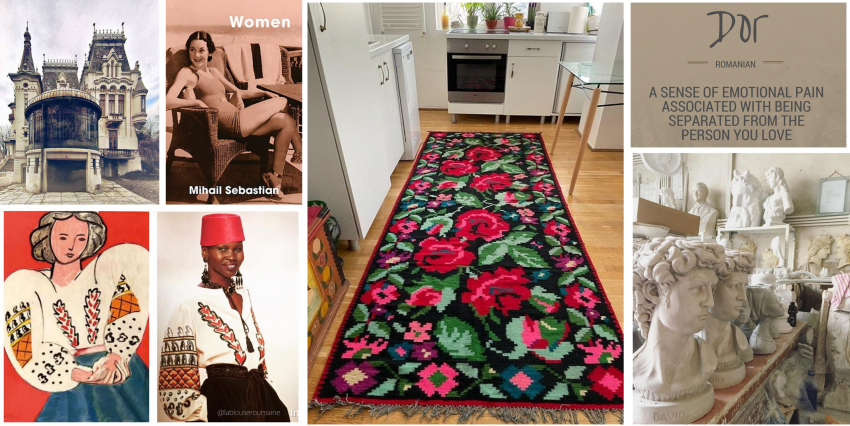 I am spending the holidays in my home country and whenever I am here I take a lot of pleasure in reconnecting with things I love about our culture and way of life. One major element is, of course, our literature, the books that made me fall in love with reading long before I discovered Harry Potter or any Jane Austen novel. I make a point of reading new-to-me Romanian works when I am home and this time is no exception.

I had a few titles on my list to add to my mom’s extensive home library, and among them was Women, by Mihail Sebastian. I didn’t realise this initially, but I am glad that this book has actually been translated into English and can be ordered online from various sources, in the UK and elsewhere in the world. Even though Mihail Sebastian (1907-1945) is a well-known Romanian writer, I can’t recall reading any of his other works. He is most famous for his plays and more recently for his Journal.

I am enjoying this short novel or collection of short stories, which has received positive international reviews, but it must be said that the topic is quite modern and feels foreign to me if I think of classic Romanian literature. Thus, I wanted to see what other local works have been translated into English and I was lucky enough to find this list developed by the Romanian Cultural Institute in London. It’s very short and while you can find on it some of our best known and most popular authors – Mircea Eliade, Nichita Stanescu, Ana Blandiana, Hortensia Papadat-Bengescu – most of the names are new to me, for they are contemporary authors and I am unfortunately not familiar with their work.

Still, if you’ve never read Romanian literature before, I encourage you to try it! There are so many gems waiting to be discovered even on this short list… and so many more waiting to be translated. To start with, try Ion Luca Caragiale’s Sketches, Stories and Plays, for authentic Romanian wit and humour, Ion Creanga’s Recollections from Childhood for a taste of growing up in idyllic rural Romania, or Petre Ispirescu’s Romanian Folk Tales and Fairy Tales.

It’s simply heartwarming to think of some of these.

Speaking of Romanian women, one couldn’t have been in Romania this past week or so without hearing about the new 20 RON banknote featuring, for the first time since the fall of the communist regime, a woman – Ecaterina Teodoroiu, the country’s first female officer, a World War I veteran. It’s a long overdue and welcome change.

Truth is, there are many remarkable Romanian women who have made history and whose stories are well worth knowing, among them Elisa Leonida Zamfirescu – considered the first woman engineer in Europe, Sarmiza Bilcescu – Europe’s first woman attorney, Sofia Ionescu-Ogrezeanu – one of the first woman neurosurgeons in the world, Ana Aslan – biologist and physician, a pioneer in social medicine and many more.

Get inspired and read more about them and others here, here and here.

La Blouse Roumaine is not just a painting by Matisse, it’s not just a part of the Romanian traditional costume, it’s not just a beautiful work of local craftsmanship – it has become a symbol. For me, it’s a symbol of how our roots are unchangeable and invaluable, for they give us character and unique heritage. We can each decide how to honour and make this part of our everyday life.

The Romanian traditional blouse has inspired many artists over the years, from painters (see here a collection of other paintings depicting it) to designers. In the fashion world, perhaps the best-known names that have paid homage to this Romanian icon are Yves Saint Laurent, Jean-Paul Gaultier and Tom Ford.

I’ve worn more than one ie – the Romanian word for our traditional blouse (pl. ii) – over the years, but I think sometime soon I shall make an investment into one to have for decades to come. There are many local artisans, as well as fashion designers, offering a wide range of options, but I’ve just discovered a lady creating traditional blouses and dresses using borangic, natural Romanian silk. She is not only the last one in the country still doing this, but she also happens to live in the same region of the country as my family. It feels very serendipitous and just look at this beautiful example!

Equally inspiring is the story of the Romanian suman, a traditional coat that features intricate embroidered details, famously replicated without giving credit by Tory Burch in 2018 and also by Maria Grazia Chiuri for Dior and Valentino, even prompting an international awareness campaign – Bihor not Dior.

A while ago I wrote about these Anthropologie floral rugs which I found delicious and now I realise part of the attraction must have been the similarity with Romanian vintage rugs featuring big floral motifs.

These are exquisite statement pieces, in my opinion, and I found an online store – Made with Love Romania – that specializes in finding and restoring vintage ones that would simply look fabulous in any modern house with personality.

There are various views on why Bucharest was and still is sometimes called The Little Paris (of the East) but instead of diving into a decades-old polemic, I will take the easy way out and say that there is at least one positive reason for the association – the beautiful architecture one can still find wandering the streets of our capital city, very reminiscent of the Belle Epoque and of Paris.

From the Macca-Vilacrosse Passage to the Kretzulescu Palace, from the Romanian Athenaeum to the Cantacuzino Palace, hosting the George Enescu National Museum, there are countless reasons to get lost exploring the city, camera ready to snap some beautiful shots. This is a handy sum-up of Instagrammable places in Bucharest, but my personal favourite is the Cotroceni neighbourhood, where you can spot some of the most beautiful old houses (as well as magnolia trees) in the city, if not the country.

There is even a Little Paris Museum in Bucharest, in another brilliant neighbourhood worth exploring – Lipscani, or the Historic Quarter.

Bonus exquisite finds, even though I haven’t watched these myself, I thought I’d also share two documentaries about the incredible natural beauty of Romania, Untamed Romania – available on Netflix, and Wild Romania – launched this year after being ten years in the making.

This is the story of an 85-year old plaster artist whose studio is considered the last of its kind in Bucharest, Romania’s capital city. She has been doing this for 65 years and even through the pandemic, she has been hard at work, on her own, in her studio at No 35 Calea Grivitei.

I haven’t had the chance to visit it yet, but I am hoping to do so before we fly back to the UK in January. Mrs Maria Radulescu is described in all the articles about her as a kind, almost angelic lady, with a huge passion for her craft, who has taught generations of new plaster artists in her long career.

I would love a David bust by her!

I couldn’t do a Romanian edition of Miss Onion’s Exquisite Finds without featuring a rare word. In fact, this is considered to be a unique word, untranslatable in English, describing the deep feeling of missing someone or something. In Romanian, we have a name for it, a three-letter noun – dor. It’s likely the deepest and most complex three-letter word we have.

Dor might seem like the obvious choice for a Romanian, as we all know about its uniqueness, but I found it very fitting above all because, on the occasions I experience this feeling, it’s almost surely connected to Romania, the family and friends still living here, the places and traditions I always remember fondly.

If this letter has offered you a moment of inspiration, kindly forward it to others who might enjoy it too. And if you have been forwarded it, indulge in all previous Miss Onion’s Exquisite Finds and subscribe to the weekly letter.

Find an article you fancy