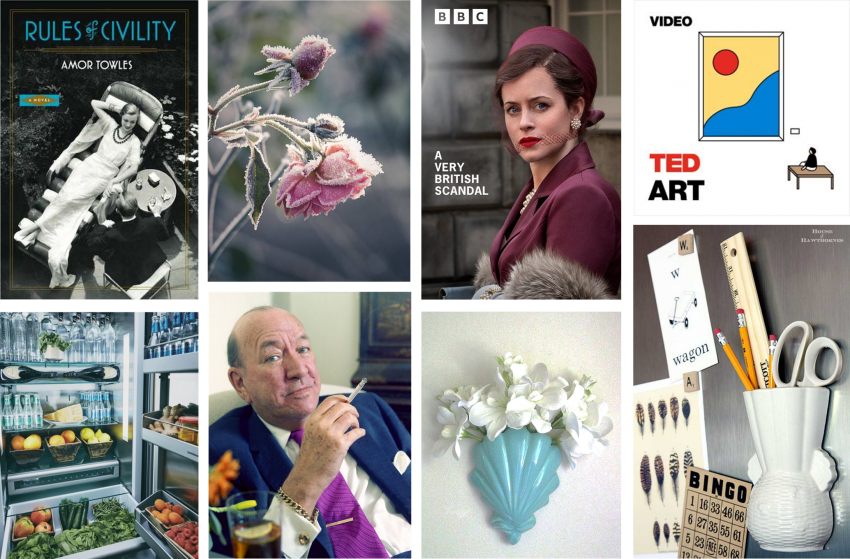 Rules of Civility, by Amor Towles

The book I started 2022 with was Rules of Civility, by Amor Towles. It’s been on my list ever since I absolutely delighted in A Gentleman in Moscow – funny enough, precisely one year ago. I might have unintentionally started a tradition…

Although very different from the first, again with this one I was caught in the story from the first pages and I wanted to learn what happens next and what becomes of the characters. It’s brilliantly written, always keeping you waiting, while also keeping you happy to be just where you are. A rare and exquisite feeling!

This book is like a brush with the New York upper society of the late 30s – early 40s, without being a book about it per se. I came to love the heroine, who might seem like the most uninteresting character in the book while you’re reading but materialises as the de facto main character once you are done reading.

I don’t know if I have done it justice, this book is truly enthralling!

In the last couple of weeks, I’ve amassed a huge list of things to watch, which rarely happens, as I have become very specific about how I spend my viewing time – in my house, the TV is on, if at all, only after my son’s bedtime and I am not sure we have a TV licence, all content I watch is on-demand. Long gone are the days of lounging and watching random TV or having it run in the background for hours… and I don’t miss them, to be honest.

For some reason, earlier in the week, out of all the things to watch on my list, I went with A Very British Scandal. I thought it was going to be a lighthearted story, something out of a P.G. Wodehouse novel, for some period escapism. Of course, if I had just paid attention to the three-part series being classed as a drama, I would have known better.

But of course, the mini-series is simply captivating and the actors do a brilliant job. Thinking that the story is based on true events – the notorious divorce of the Duke and Duchess of Argyll during the 1960s – and reading a bit more about it after, makes the viewing experience very intense. Throughout the third and last part, I was on my toes keeping my fingers crossed things will go in her favour. I really wanted her to win… at least at something. Of course, it is never as simple as that. I can’t imagine how it must have been to actually live through these events.

More research on the Duchess of Argyll will probably follow.

I stumbled upon this five-minute video on the TedEd YouTube channel on why the Mona Lisa is so famous and I had to watch it because I honestly don’t know much about it. But this exquisite find sent me on a binge, as I was then suggested one on Why is Vermeer’s “Girl with the Pearl Earring” considered a masterpiece, one on the strange history of the world’s most stolen painting and even one on the unexpected math behind Van Gogh’s “Starry Night”.

These are not all done by the same person, but they are similarly eloquent, concise, packed with facts and insights. I found the style very approachable and easy to follow, leaving one wanting to explore more similar content. And so I shall…

I had no idea what wall pockets were until this week, even though I actually own one! I thought this was a sort of ‘wall-vase’, but apparently, such a thing does not exist and instead, we have the concept of wall pockets. It’s honestly a much better name, isn’t it? I came across it randomly while reading this engrossing New Yorker long-read about estate sales (an exquisite find in itself!) and I had to Google it and see what it meant.

Now I am set to hang mine soon, as it’s been waiting for over a year at least, and make the most use of it. I think vintage pocket walls should make a come-back, they seem the perfect little semi-useful and highly decorative addition to any wall. They can hold a planter, fresh, dried, paper or other types of flowers, as well as tools of various kinds – writing, painting, sewing etc.

Of course, there are many modern options, even though they might not go by the same name, but somehow the old ones seem to hold more charm, don’t you agree?

I Went to a Marvellous Party, with Noël Coward

Courtesy of The Dilettante, last week I discovered the genius of Noël Coward! I’ve been obsessed with this musical theatre performance ever since and I’ve almost learned it by heart now. I shall endeavour to perform it around the house to the benefit of my two and a half-year-old son. I trust he will fully appreciate the show!

As it always happens, this got me exploring other songs and works by Coward, who was indeed a genius of his time! I already have a few favourites among the fraction I’ve explored, like Mad Dogs and Englishmen, Why do the Wrong People Travel and of course London Pride. But there is so much more, including full movies and plays, simply available for free on YouTube. I didn’t even realise I was watching a full documentary about him until halfway through, as it was so interesting and truly helped me paint Mr Coward in the right colours in my mind.

I hope you enjoy this Marvellous Party Mr Noël Coward went to as much as I did!

I had way more fun than probably normal reading this piece in the Financial Times about what an aesthete keeps in the fridge. Firstly, what is an aesthete? And why would one assume that their fridge’s contents would be different than the norm? Secondly, I have no idea how the people selected were chosen or who most of them are, and neither do I care.

That said, I was genuinely curious to see what other people would declare when asked about it when they obviously need to put up a smart face. The top choices? Wine, or the posher option – champagne, many pickled delicatessens (some of which sound invented to me), all sorts of Italian specialities, cheese and some very specific sauces and spices. Only a couple of people mentioned lots of fruit and veg – too common, I suppose. This excludes the trendy avocado and the occasional spinach, salad or greens in general – because these look good.

What I definitely found in common with my fridge (not an aesthete’s fridge by any means) – butter, parmesan cheese and cheese in general, Babybels (my son’s favourite snack – had no idea they are posh in any way). And for anyone interested in other staples of mine – lots of veggies for soups and stews, some type of yoghurt or sour cream, eggs and milk, homemade pickles by my mom and the classic mustard, ketchup & co.

On one of my walks back home I spotted some frozen half-dried rosebuds in someone’s garden and I instantly thought ‘How beautiful!’ I also snapped a few images, but they were not the best. Nonetheless, I wanted to share this fortuitous exquisite find.

First, it reminded me of the rose ice cubes I wrote about a while ago, but then it reminded me of a phenomenon that happened a few years ago also back in Romania, when whole trees were covered in a thin layer of ice which looked mesmerising but also a little bit eerie. We all soon learned that this was really damaging to the trees, but one could simply not stop admiring all the photographs that were invading our feeds at that time.

I do hope I won’t have occasion to witness any of these again in person soon, for I am quite done with winter (silly me!) and I am all ready for spring, longer days and warm weather.

If this letter has offered you a moment of inspiration, kindly forward it to others who might enjoy it too. And if you have been forwarded it, indulge in all previous Miss Onion’s Exquisite Finds and subscribe to the weekly letter.

Find an article you fancy